It started out simple enough.

“Hey, I’m going to a conference in New Orleans,” my friend Deidre said. “There’s an extra bed in the hotel room. Want to come?

“Yes,” I said. A free place to stay has inspired almost all my travels, and exploring the music, history and vibe of New Orleans certainly appealed.

As the departure grew closer, a Sacramento meeting cropped up, then one in Point Arena. Also, my daughter Kaylee opted to tag along during her spring break, but would need a ride to San Francisco from Santa Cruz.

And then my other daughter, Chelsea, needed to come back to Humboldt to regroup and prepare for her next chapter. She and her dog would be in Santa Barbara awaiting pickup.

Bobby and I worked it out.

It should be noted that I was working from the road, stressed to the gills, up until Kaylee and I Ubered our way to SFO. Grant report? Check. Weight off shoulders? Check.

St. Lawrence. Oh, yum. Also, not altogether unlike being in San Francisco: “Our kitchen prides itself on creating simple, thoughtful dishes that showcase the fresh, local and regional produce that serves as the divine crux of our ever evolving menu. We offer a chef-driven, respectfully playful take on Southern and New Orleans classics with an international flair.” Gouda grits!

Bourbon Street. Here’s what I imagined: burlesque and booze and jazz for blocks. Here’s what it was: strip clubs and big-ass beers and terrible cover bands. For blocks. I anticipated historical decadence, not a Spring Break cliché. Live, learn.

Maison Jazz: You could mostly hear the jazz trio over the sound of the partying outside, although every so often, the sounds of “Don’t Stop Believing” or “Psychokiller” bashed their way in from the surrounding clubs. But Maison Jazz provided the first example of what I thought New Orleans would look, sound and taste like. (Rye with bitters.)

The Swamp: Good grief. Do we want three terrible beers for the price of one? No, just no. What we wanted was a balcony. But not like this.

Daylight brought the view. Sometimes I stay in hotels that are nicer than I am. I wish I’d remembered a swimsuit.

Commerce: Came recommended, but was closed due to a movie being filmed. (Al Pacino. Indie flick. That’s all I remember. Deidre took notes.)

Dress It: Omni hotel café, where, instead of menus, they hand you order forms and you build your sandwich or omelette. Like a deli counter at your table. It was fine.

City Park: They say it’s bigger than New York’s Central. It didn’t feel that way, but I didn’t measure. Ponds, a botanical garden, sculptures, an art museum, the usual accruements. The street car ride leading to the park had passed through nondescript urban zones. Where was New Orleans’ personality? I wondered.

Meanwhile, my friend Ryan sent me a photo of the new Journal. Oh, wow. Suddenly, instead of being sad that I was missing the cover story I’d worked so hard on, I was relieved. This would have been too weird, so much me, all over town. 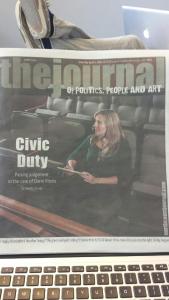 Green Goddess: Being a vegetarian in New Orleans limits one’s options. I inhale sea food, but Kaylee is strict – this place, with it’s “uninhibited cuisine and spirits” offered beyond the usual mac’n’cheese options. Like this: “Burutta Pane Grigliato – 1/4 pound of Burutta cheese over fresh made grill bread, topped with pesto and a red gravy both garnished with xtra virgin olive oil, served with a nice arugula salad with fresh local assorted greens, roasted beets, lemon and Sicilian orange oil dressing.” See? Very happymaking. Also, again, like being in California. I was not sinking my teeth into the New Orleans food experience yet… Nonetheless, authenticity-seeking aside, when offered French toast stuffed with dark chocolate and gouda, say yes.

Magnolia Praline Company: Oh, god. The sugar. The nuts. Yes. And a taste legit to the South. A turning point.

French Quarter, beyond Bourbon Street: Walking around Decatur and Royal and Jackson Square better acquainted us with who New Orleans is. Flowering balconies. Charming buskers. Classier bars – to-go cocktails still available in a plastic cup, of course, but at least the ratio of fine cocktails to hurricanes had increased.

The Sazerac Bar: We put on our fancy clothes. Worth a drink, although at $14 a pop, not necessarily two.

The famous Cafe Du Monde: Earlier in the day, the line stretched around the block, the expansive patio bursting at the seams. But at 11 p.m., plenty of seating! Decaf chicory coffee and beignets that lived up to the hype. (The “hype,” of course, being that fried dough covered in sugar is going to trip all your deepest pre-evolution wires.)

EnVie Espresso: This exists: “Rumchata,” which is exactly what it sounds like, horchata-flavored rum. If you add Earl Grey tea to it, you will find yourself drinking a “NoLa fog,” which is a perfectly reasonable way to start the day in New Orleans.

(Booze is always an option in New Orleans.)

Carousel Bar: My brother Tag and his wife, who is also named Jen, had flown down from New York. This place was their idea and it was brilliant, like the bar itself, a very merry-go-round, especially with a French 75 in hand.

Frenchmen Street: This is the street you should be on instead of Bourbon.

We took the streetcar to the cemeteries. 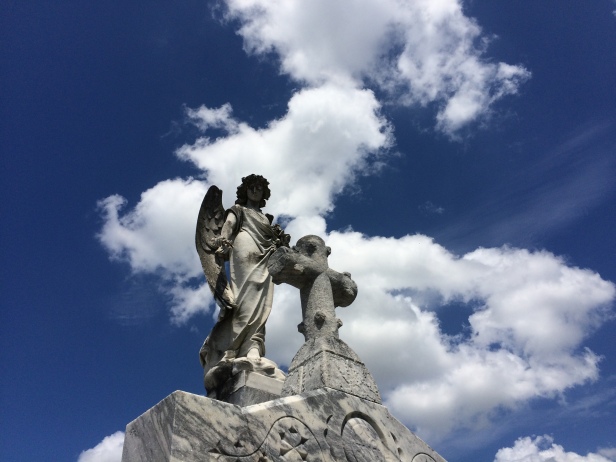 Wandering through the crypts and mausoleums may cause you to wonder about your own burial. Advertisements in the restrooms, then, are admittedly well-placed.

(Via my brother’s Tumblr.)

Bamboulas: Say you’re hungry and thirsty from strolling cemeteries. You want a nice place to sit with some music and cocktails and fried pickles. This would be an extremely suitable choice.

Bywater: If Bywater were in New York, it would be Brooklyn. If it were in Los Angeles, it would be Silverlake. If it were in Texas, Austin. Which is to say, dining, drinking and coffee options are attractive and plentiful. I can’t figure out if the locals are friendly or not. The waiters speak with that honeyed molasses drawl that I want to eat up and the waitresses call us, “baby” and “y’all,” but pass someone on the street and a “good evening” is rare. (Except the older gents. But older gents always say hello or mention how beautiful you are or, as one fine fellow dancing alone to music blaring from his car did, offer to help you with anything you might need.)

We went to a crazy thrift store.

Sbisa: My favorite of all the bars we went to. In addition to tasty cocktails and a pretty balcony, when searching for the restrooms, we discovered that the building apparently goes on forever, with all kinds of staircases and endless nooks.

Bourbon House: Here is where you will order a flight of rye whiskey and discover you enjoy the Smooth Ambler best.

Huck Finn’s: Tried for Commerce again, but it was closed for Good Friday, so we ended up here, served by a 20-something waiter with the aforementioned sweet accent to die for. I wanted to record him, but that seemed a little too weird. And not in a good, New Orleans-weird, kinda way.

Honey Island Swamp Tour: We did see a mama alligator and a baby alligator. I could not get a decent photo of either. The tour included pickup from the hotel and a discourse by the driver on the damage done by Katrina – I couldn’t hear as well as I’d’ve liked, but we passed through areas where the damage had been extensive. (I need to watch that Spike Lee joint.) We also happened to pass by a Good Friday celebration that included three live men tied to crosses. That was a thing.

Jimmy J’s: From the outside, looks touristy. OK, it is touristy, but also boasts an excellent eggplant sandwich and serves breakfast all day. Do not, however, ask the waiter if they happen to have soy milk. You will never quite recover from the eye-rolling. We had some bonus drama when a woman parked just outside backed her SUV into a scooter, knocking it over and flooding the street with gas. (Unlike California, gasoline on the street does not trigger the appearance of a Hazmat crew.)

Royal Street is fun. Especially with people you like. 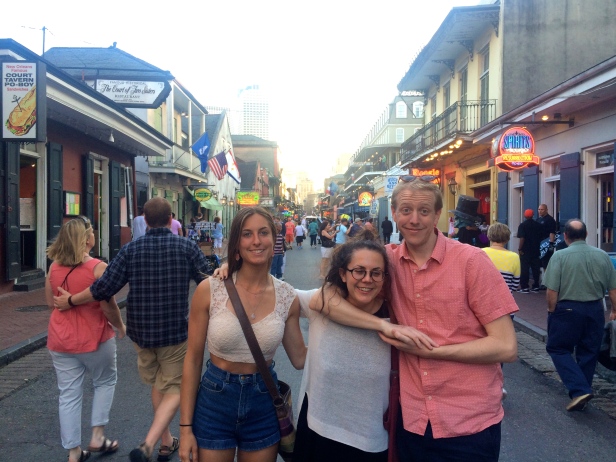 Back to Frenchmen Street…

Snug Harbor: Welcoming, hopping little spot. We met up with Deidre and her compatriots from the conference, Olga from the Ukraine/Kansas and Pierre from France (obv). Managed to score the entire front section of the bar, which lent well to long discussions about academia, culture, travel and the sort of related discussions that happen when you’re all drinking whiskey into the night.

Dat Dog: A veggie dog option made me happy because a veggie dog piled with sauerkraut and cheese serves so well as a late night alcohol-absorbing snack. We sat on the balcony and applauded our extremely patient waiter. We decided waiting on drunks is very much like parenting – you need a lot of patience dealing with irrational and easily distracted people.

Freret Street Festival: Rollicking brass bands, garlic fries, praline balls, arts and crafts made as if someone cares, strawberry-basil margaritas. I bought Bobby a super-soft T-shirt that says, “I want to be Bayou.”

From there, the Garden District by way of Lafayette Cemetery No. 2 and No. 1. 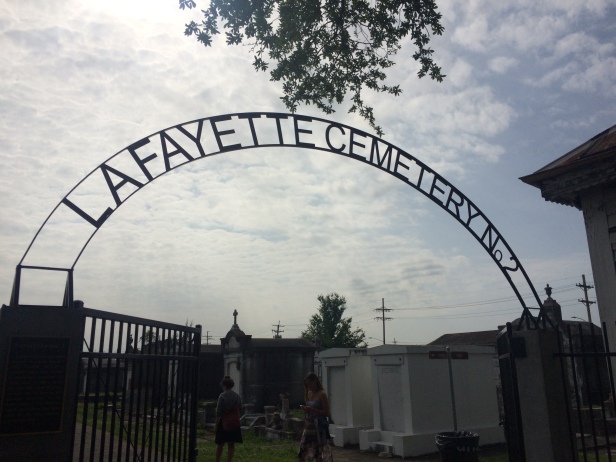 This was our last night all together. Some people thought Hand Grenades were a must-have. Another person opted for the more sensible Maker’s on the rocks. Guess who was the least hungover in the morning? Not the people who had to catch a 5 a.m. shuttle to the airport!

Everyone else left. I shifted locations to the Faubourg-Marigny district, hunkered down in a little studio rented through Air BnB and spent most of the day writing – because that’s what writers do, even if they are in New Orleans, yes? – except when I put on my blue-and-white dress, the most Easter-y dress I’d brought with me, and ventured out to Tableau (per my host’s suggestion) for a ginger lemonade and fingerling potatoes breakfast and then to Preservation Hall, where the mostly a cappella tunes of St. Cecilia’s Asylum Chorus moved me to tears – an unexpected loneliness had pervaded upon the departure of friends and family.

Later, stomach growling, I forced myself to take a break and tripped back out to the highly recommended Verti Marte for a BBQ shrimp po’boy. Along the way, the New Orleans Gay Easter Parade took me by surprise.

The Country Club: The morning’s mugginess had me dripping with sweat by the time I arrived, but a cool bowl of gazpacho and watermelon salad on the veranda quickly refreshed. And then I bought a pass to the pool in the back and spent hours alternately swimming, sunbathing, dipping in the hot tub, drinking Bywater Sunrises and reflecting on what good fortune brought me here.

2 thoughts on “Notes on New Orleans”